Varicose veins affecting the lower limbs tend to run in families but are also aggravated by pregnancy, hormones and other environmental factors. They are rarely dangerous, although they can be painful, unsightly and cause damage.

*30% of us are destined to acquire varicose veins, so they are just a variation of normal.

Varicose veins can be primary (inherited). They can also be secondary to a previous episode of deep vein thrombosis (blood clot formation in a central vein). They are occasionally associated with abnormal vessels inside the limb or body. They appear as bulges under the skin and are ropey and tortuous in appearance. When the limb is elevated they generally improve but refill on standing.

Visible wavy blue vessels and spider veins should not be referred to as varicose veins, although a varicose vein deep in the limb may be causing their appearance on the skins surface.

*80% of us develop these marks

Aching legs at the end of the day is a common problem in the population at large, but the presence of varicose veins often exaggerates this phenomenon. This type of discomfort is alleviated by elevating the legs. It can also be improved by wearing compression stockings or socks.

Swelling of the lower limbs from fluid accumulation (oedema), generally around the ankles. This is because the pressure in the veins causes fluid leakage into the limb.

The interference of the circulation in the lower limbs by varicose veins often leads to skin changes, namely dermatitis (known as varicose dermatitis). The eczema from this can be very severe and disabling. Scaling and staining are often associated with these.

High pressure in surface veins often results in more extensive bruising than one would normally expect from minor bumps.

Some patients experience tenderness, bruises and pain. This can be due to high pressure in their venous system.

In severe cases, if left untreated, symptoms can progress to include:

Damage to the leg tissues

Pressure from veins can cause inflammation (cellulitis) and tissue hardening in the calf. This often looks like infection but is usually only inflammation from tissue damage. Damage to the fatty tissue causes permanent scarring around the ankles leading to hardening and can result in “Champagne Bottle” shaped legs.

Ulcer formation, especially around the ankles, is due to the poor skin circulation caused by varicose veins. Sores and ulcers may occur without injury and just appear spontaneously. They can be extremely painful and occasionally become very large requiring skin grafting.

Bleeding from superficial varicose veins can be dramatic and can occur without warning. This phenomenon occurs with very superficial dark coloured blebs. Immediate treatment by pressure or elevation avoids massive blood loss and risk to life. The emergency treatment is by injection sclerotherapy and then later management of the larger veins. This complication is known to be life threatening especially in the elderly and infirm who may be unable to elevate the leg or press on the bleeding point.

Surface clot formation in the veins themselves, causing lumps and inflammation under the skin, can be dangerous and needs review promptly if it occurs. Most episodes of surface thrombosis are managed with anti inflammatories. Although Deep Vein Thrombosis can occur subsequent to surface thrombosis, varicose veins represent only a modest predisposition to deep vein clots. Thrombosis close to the groin can result in serious complications and needs prompt management. Any clot formation causing a hard lump should be seen by your doctor promptly.

The essential defect is a weakness in the valves or walls of the veins which allows blood to flow in the wrong direction. Veins are designed to carry blood from the limb back towards the heart, upwards against gravity. This is managed by valves within the veins themselves which shut to prevent backwards flow of blood. If the valves are defective, faulty or weak then there is backwards flow which results in the formation of varicose veins.

Aggravation is also caused by pregnancy or obesity, which places additional strain on the valves. As the veins stretch under the additional pressure they tend to dilate, taking on the apperance of varicose veins. 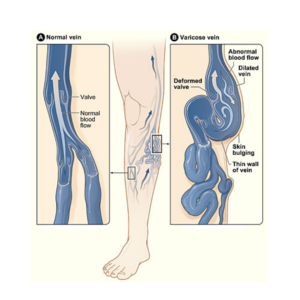 Complications following treatment of varicose veins can include the following;

Unsightly appearance can occur in the from of lumps and distended veins.

Swelling of the limbs from fluid accumulation (odema), generally around the ankles.

Aching of the limbs from high venous pressure and fluid accumulation (odema).

Easy bruising can occur after minor knocks or bumps.

Dermatitis in the form of an uncomfortable itchy rash (normally around the ankles).

Ulcer formation, especially around the ankles, can result from underlying varicose veins. Any abrasion in the presence of varicose veins will take a longer time to heal. Sores and ulcers can occur without injury and may just appear spontaneously.

Discolouration of the limbs with brown staining from iron deposits and/or aggravation of surface veins (blue-purple discolouration) can occur.

Bleeding from veins, especially from the lower leg or foot, can be life threatening unless treated. A bandage and leg elevation prevents catastrophic blood loss.

Inflammation and pain from pressure in the veins making them tender and bruised.

Inflammation (cellulitis) and tissue hardening in the calf often looks like infection but is usually only inflammation from tissue damage. Damage to the fatty tissue causes permanent scarring around the ankles leading to skin hardening and the legs taking on a “Champagne Bottle” shape.

Although not common, death can be a result of related issues to varicose veins. Bleeding from veins can be life threatening but only if neglected and not managed by pressure and elevation of the leg. The veins that tend to bleed are the purple lumpy veins at the ankles.

Thrombosis close to the groin can result in clots breaking off and traveling to the lungs (pulmonary embolism) causing death. Thrombosis in very large leg veins can also propagate and be dangerous.

Changing your parents is not an option.

Do elastic stockings help prevent varicose veins? Not really. They normally only provide symptomatic relief while being worn. They do not prevent progressive changes in the vein wall. However, they may help prevent complications like pigmentation, ulceration and inflammation.

Sitting instead of standing will reduce the pressure on the leg veins especially if the legs are elevated. Prolonged sitting and immobility however reduces life expectancy and leads to other health problems.

Running and walking both improve venous circulation and are therefore recommended for health and lifestyle.

Shoes and flooring have nothing to do with causing varicose veins. Concrete floors are no different to wooden floors as gravity does not change.

Crossing your legs will give you varicose veins

There is no medical or scientific evidence to support this claim.

Varicose veins often become most apparent during the last trimester and with each successive pregnancy tend to get worse. They can often cause swelling and discomfort during pregnancy. There are benefits to treating your varicose veins before pregnancy. This helps to reduce complications such as swelling, discomfort, thrombosis and inflammation.

Varicose veins are only cosmetic

This is completely untrue. Varicose veins develop because of a physiological defect with the venous valves. This defect results in blood flowing in the wrong direction. See list of complications.

New treatments, yet to be proven in the long term, involve glue occlusion, mechanical devices, echosclerotherapy and CHIVA method of varicose vein treatment.

Smaller “spider veins” (venules) and surface varices recur throughout life and are only manageable by repeated treatment with injections. The injections are usually good at clearing veins for a couple of years at a time.

False:-Thanks to new non-surgical technologies that have revolutionised the treatment of varicose veins, you no longer need to admit to hospital to have your varicose veins treated. Unlike older methods of vein removal, these new treatment options mean you can have your veins treated as an outpatient, with local anaesthetic and a shorter recovery period. This option applies for single limb treatment as long as varies are not too gross.

Hospital treatment however is required if veins are too large for outpatient treatment. Having an ultrasound of the area will determine if they are too large or not.

Hospital treatment is less expensive, if privately insured, and more appropriate for synchronous treatment of both limbs. General anaesthesia is more comfortable and safer than large doses of local anaesthetic agent.